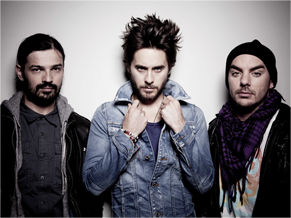 Thirty Seconds to Mars’ music has been associated mostly with new prog, progressive metal and alternative rock, but they have also included emo, screamo, space rock and synthrock into their music. They have been compared to Pink Floyd (who were an influence on their work) and Tool because of their use of philosophical and spiritual lyrics, concept albums and their use of experimental music.